Heading to Nice the countdown is nearly over

Flying with a bike is always a slightly trying affair, all the more so when I'm trying to fill the bag to the brim with kit, food and a big, heavy lock! 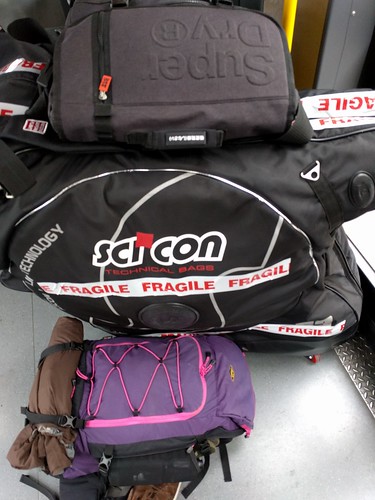 What's in the big bag?

The bike is packed, the bag weighed down with so many energy bars that I was surprised to get it through check in – there was a bit of emergency repacking after I weighed the thing this morning. I even had the obligatory “was ist das?” at the bus stop asking what was in the bike bag.

The last few days has been a whirl of eating, packing and daydreaming about mountains. The last few months have been mostly training and planning (that, and the small matter of building up our collection of um … personalised ultrasound images). The time since booking my place on this crazy trip last September, back when this seemed so far away, has flown by, and suddenly I’m in the airport ready to go.

I remember thinking at some point about what the hardest thing about an event like this would be, and deciding that it would be the preparation. If I could arrive at the start ready, then the rest would fall into place; if not, then it would be too late by then to do anything about it. At this point I can’t decide whether I still believe that!

But the prep has worked, and the most likely reason not to make it round will be this ankle problem. It’s all taped up at the moment to give it some support (the physio told me off for not shaving my legs) and we’ll just have to see how much it becomes an issue during the race.

In the meantime, there’s plenty of logistics to distract, with shopping lists for Nice (still couldn’t fit everything in the bike bag!), a last minute change of hotels along the route and planning riding and eating for the weekend in Nice. For now I’m just really hoping that on this visit to Tegel Airport I won’t see my bike be dropped from the aeroplane to the tarmac again.