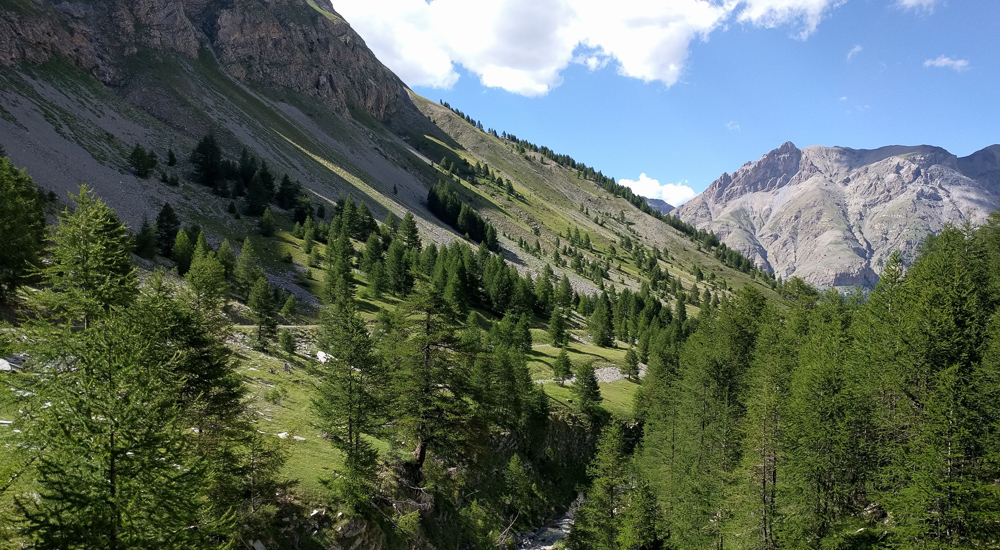 I'm riding the Haute Route Alps 2017, from Nice to Geneva through the mountains. This describes what it is and how much it's going to hurt.

Here are the facts and figures for each stage, with a report post from after each day.

My wife thinks it’s mad, and keeps telling me that I “could just not do it!”

Since I’ve been cycling I’ve wanted to find rides that are a challenge. Pick something hard, and see if I can do it. I’ve liked to have something to aim towards through the year, to keep me improving (and honest!).

The first big one, in 2014, was La Marmotte, climbing four big mountains in the French Alps, finishing with the iconic climb up the 21 bends of Alpe d’Huez. (Until then I was more used to going down Alpe d’Huez on snow, than up it on tarmac!) It’s a ride of 175km, climbing more than 5km vertical ascent. That’s quite a lot – it was more than ten hours in the saddle, including two hours to climb the Col du Galibier, up into the snow-line. It’s a beautiful ride, and there are certainly no climbs like that in Surrey.

In 2016, before revisiting the Marmotte I went to Italy, for the amateur edition of Milan-San Remo. This is a prestigious stage race for the pros, among whose ranks (despite the awe in the eyes of the hotel night manager when I explained what I was going to do with the bike in the big bag) I decidedly do not belong. It’s famous for being among the longest races in the calendar, just short of 300km from the centre of Milan, over one big hill on the way to the coast, and then to the small town of San Remo, on the Italian riviera. A very different kind of ride to the Marmotte, and a big challenge nonetheless.

The Haute Route Alps is my challenge for 2017, and it’s going to be a proper test.

The Haute Route will be my first mutli-day stage race, and it’s crazy. Over seven days at the end of August we ride almost 900km from Nice to Geneva, and over 20 named climbs. The total ascent is around two-and-a-half times the height of Mount Everest.

The riding is well supported, so there’ll be a few of those yellow Mavic cars driving around to help with mechanical problems, marshals on motorbikes and food stops. At the finish of each stage there’s medical and physio support, and even showers and massages. That’s the easy bit!

The stages of Haute Route Alps 2017

I’m sure I could get round each stage in isolation – none of them are individually as long or as a high as the Marmotte. The problems will come as the fatigue accumulates through the week, when I can’t recover fully between the stages. I’m unlikely to be able to eat as many calories in a day as I spend, or sleep as much as my body wants. Eating 2,000 calories at breakfast each day at 0530 will be a tough ask in itself (even if the croissants are up to the French standard).

All manner of things could go wrong, of course, from an expensive puncture to a bad mechanical (or biomechanical!) problem, to a crash. I’ll be doing my best to avoid and minimise all of those.

The race is fully timed, but there’s a twist there too – falling behind a daily time cut means losing your official placing. They even have a rider pacing at the cut-off, called the Lanterne Rouge after the name given to the last-placed rider at the Tour de France.

With around 500 riders, I’m sure I’ll get to know some of them pretty well, those riding at a similar pace to me. But I have no idea what the pace and experience of the other riders in the peloton will be, nor how I’ll measure up to it. I know that the front of the ride includes former (and current!) pros, so there will be some hard riding there. Further back, I don’t think I’ll know how I compare until I get there. There’ll be a good indication on the first climb (though with adrenaline kicking in, probably everyone will push too hard that early in the week anyway!) but by the time we roll into the first finish at the ski resort of Pra Loup I should have an idea of which side of the time cut I should be on.

In terms of having an actual target for the event:

My target: beat the time cut

Riding long distances in mountains isn’t about sprints, it’s about endurance – pushing power through the pedals for a long period of time. When climbing the only things that really matter are the amount of power you can push, and the weight that you’re carrying up the hill. This ratio of power to weight, measured over long time periods, is the thing to aim to increase. So the plan for training has mainly revolved around increasing this functional threshold power. My power-to-weight ratio over a full hour is somewhere below 4 watts per kilogram. (For context, a Tour de France winner will be above 6 W/kg, so there’s a way to go before the Milanese night manager can say he spotted any real talent.) My training target is to be above 4 W/kg by the time I get to the start in Nice.

An obvious way to train for climbing mountains might be to climb a lot of mountains. Unfortunately, the surroundings of Berlin being as flat as a pancake, there aren’t many natural ways to do this. This has meant a lot of riding indoors doing low- and medium-intensity intervals – boring but effective at getting a good base of endurance power. Throw in some visits to the Cornish hills and this year’s Marmotte and that’s as much real climbing as I’ll be able to get in training. For any more I’ll have to pretend.

The old saying goes that cycling never gets easier, you just go faster. I’ve found it difficult to judge how the training is going, sometimes, because the workouts don’t feel any easier. The suffering comes in self-inflicted timed bursts, and doesn’t get any less as training progresses. The real test, and the reward, is getting up into the hills.

Bring on the mountains

The couple of days before my first Marmotte were the first time I’d cycled in mountains. It’s beautiful up there – long views down into the valleys and over to the next snow-capped peaks.

The ascents are fun because they’re a challenge and the top is an achievement; the descents are fun, and they’re long enough to get comfortable with some speed. On long rides like these you see so much of a stunning landscape.

The plan, then, is to keep a sense of the pretty while suffering enough to finish within the limit and not so much that I can’t. I don’t know exactly how else to explain it to the wife. It hasn’t worked so far.