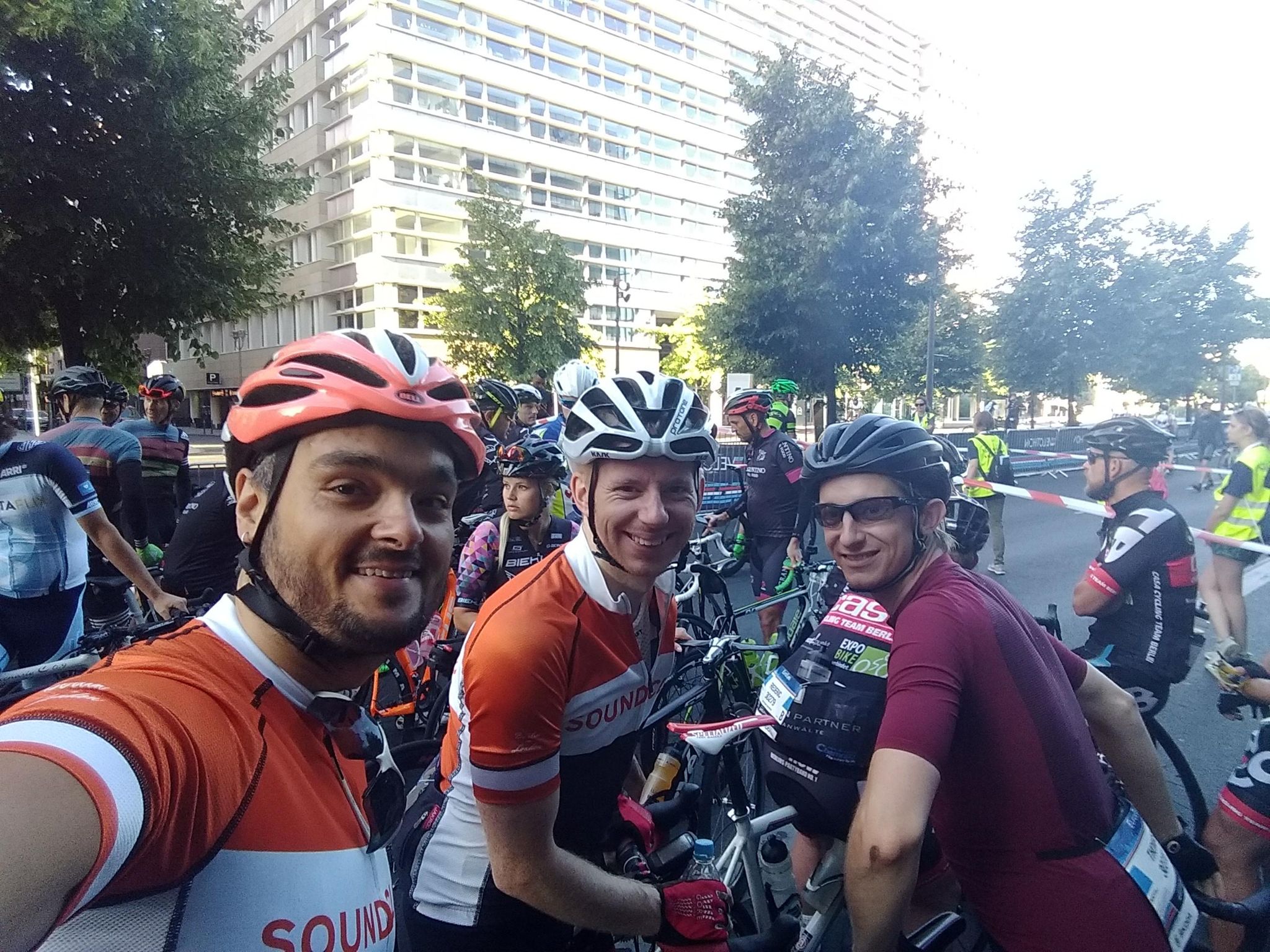 Selfie-zeit at the start with Sergio, Joe and Tom

I’m going to have to get used to these early starts before the Haute Route. Up at 5:15, fed, watered and at the start by 6:45. I was in Block B with Tom, Sergio and the first tranche of riders in the 180km event.

Along with us on the start line were a few groups in team kit, who we could watch for good wheels to follow. Apparently the ex-pro and former hour record holder Jens Voigt was there (!) to do the shortest 60km version (!) on a hybrid bike (!) as a VIP participant. And we were next to a guy with a very smart-looking Cervélo, looking very aerodynamic in his skinsuit and smoothly-shaven legs. Definitely thought he looked like a poser, and indeed we didn’t see him for the rest of the race.

The countdown came and went, and we started straight into race tempo for first circuit loop of 60km, out and back in to Berlin. After coming by the finish we’d start straight onto the 120km circuit to make up the total.

Last year’s event was a bit of a crash-fest. The riding felt unsafe, with lots of people who were strong but all over the road. This year felt a bit better, especially so once the 60km riders had split off for their finish. There were still a couple of wobbles. The first was someone who came off, around 40km in, only a couple of riders ahead of me. Maybe he hit a pothole or something, but he lost control very suddenly and was sliding on the road with bits of bike scattering. The guy behind hit him and fell over to the right, and I was able to go around to the left. Just about. Too close for comfort.

Near the end, only a few kilometers from the finish, there was a repeat of an accident we saw last year when a pedestrian tried to cross the road and apparently misjudged the speed of the peloton. It looked like he was hit by a bike at the front of our group, and he was on the floor by the time I went past. Luckily there was enough time for the bulk of the group to move properly around him. I hope he’s ok.

When the riding is stressful, concentrating on looking for people doing silly manoeuvres and following wheels closely it can hard to eat, because it’s a choice between control (holding on!) and opening food. Last year I got that wrong, didn’t eat enough and lost the group well before the end. A bit of planning ahead this time round and I had plenty of open bars ready to go. Hopefully that won’t be such a problem in the mountains, where it’s all a bit less frantic.

It wasn’t long from the start that we began to catch the 60km riders from Block A, who started a few minutes before us. I was trying to keep an eye on the rest of the 180km riders, and Tom especially. As we came through Grunewald for the first time, maybe half an hour in, I realised that I could only see the red of the 60km riders, and no Tom! Had I drifted out of the group, and lost contact with them? How had I managed that? I’ll really struggle in the Alps if I can’t even hold on to a group in the flat plains of Berlin! And then Tom rolled up again from just behind me, and it was clear there was nothing wrong. Silly twit!

Apart from that minor crisis of confidence I stayed with the front group from start to finish, without too much trouble. In the last few kilometers the riding got more and more sketchy, and people started moving through gaps that were only just there. At that point it seemed better to sit at the back of the group for the finale, rather than risk a dangerous sprint in a race far from my most important of the year. Tom took 25th place (👏) and I rolled in with 49th, a few seconds down.

Fast ride. The average speed was over 41 km/h, finishing in 4 hours 17 minutes. Not bad for a ride almost the total distance around the M25.

It turned out that skinsuit guy won the race, twelve minutes quicker. The reason we didn’t see him after the start pen was that he and one other rode off the front near the start, and stayed away for the duration! Chapeau.