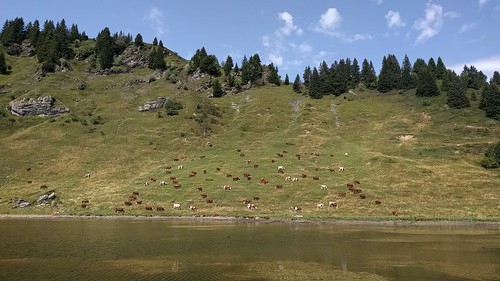 Yesterday's ride really took its toll, but once the timing started today the legs woke up again, and felt fresh and strong for the last day of the High Alps.

I woke up feeling like I’d been asleep only for a minute, feeling no better than when I had just rolled in after yesterday’s ten hours of riding. Breakfast was a slog of forcing food down but not actually wanting anything. I tried to grab an extra five minutes of sleep on the bus back to town, but that didn’t help either. There was even a drizzle of rain over the start, as we were waiting for 7am to arrive.

I managed the now-routine morning checklist (bottles, pump tyres, chamois cream, bag drop) and went to wait in the starting pen, really just leaning on the barrier at the side and waiting for the day to start.

The start was a 15km convoy out of town with the usual escort of police and safety motorbikes, along some of the route we had come in the evening before. After the 15km we hit a small, 2km climb where the timing started.

And everything just started working, like a switch. I couldn’t quite believe it, but legs hit the climb and were like “oh yes, I remember how this works”, pumping out good solid power as if yesterday was just a dream in a poor night’s sleep. As seems standard for the first climb of the day, again people were passing me, pushing way too hard up this tiny climb as if it were a little sprint. Fly my pretties, I’ll catch you later.

I had a great group for the first valley section up to the Épine, a big rolling peloton in which I had to do almost no work to cruise at a 45km/h average. Hitting the climb my legs just carried on tapping, feeling good. Quick pit stop to pick up water and it was into that rare beast of a timed descent down to a rolling valley before the Colombière.

In the valley and the foothills of the Colombière it was much more difficult to get a working group together. Not more than a few people were willing to work on the front, and I found myself doing more than my fair share of the work, and somehow also doing too little work and going too slowly when I wasn’t pulling the group. Eventually I realised that it wouldn’t need much a push to get away from the group, and that I could go at the pace I wanted alone, and faster without the group. So I just rode off the front!

Not long after I hit the start of the climb proper (passing one of the people I’ve been tracking in the GC just around then, too!), and wasn’t caught by any of that group on the way up. The Col de la Colombière was a lovely climb, starting with a few switchbacks jumping out of the village, going through another ski station, and ending up with views under towering rock formations near the top of the pass. Though I didn’t see any of the mountain ibex that were mentioned in the guide to the climb!

This was another well-paced climb, with another visit to the pain cave for the last stretch. I took a lot of time out of people on this section – after being in 157th place on the stage after the first climb, I reached this summit in 111th. Pacing and not overdoing it really was the theme of this race.

One more untimed descent, a fast one through a gorgeous, wooded valley. Near the bottom I found some fast looking riders, including four members of a team who have been riding well in the team competition. I cruised with them to the next timing mat, the start of the Col de Joux Plane, at which it became clear within seconds that I wasn’t going to stay with their pace and they launched up the hill together! (There’s a reason people win those prizes…) The start of the climb was up a dual carriageway, not the most scenic of routes, but before long we were up once more into narrow roads winding past farmhouses and cottages, and eventually into much more isolated areas.

This far into a stage it wasn’t unusual to be alone on a climb like this. I was climbing well and so still passing people occasionally, but not riding with anyone. It’s the most wonderful feeling of calm when it’s working like this, and you have the countryside all to yourself!

Again I paced myself into the pain cave for the top of the climb, helped on by a shouty guy who had parked up a kilometre from the finish just to cheer people on, and by the calls of encouragement from other riders.

As I reached the top, and as the fog of a hard effort cleared, I became aware of the sound of bells – lots and lots of bells. On the far side of the little lake at the top of this pass was an ampitheatre shaped hill covered in cows with cowbells, chewing on the grass and making an absolute racket! (The Google Street View of this area was taken in winter, giving a rather different impression of the top of this boiling hot climb.)

This turned out to be a really good day, after expectations bordering on fear at the start. I still wished I hadn’t pushed quite so hard towards the end of stage 5, though.